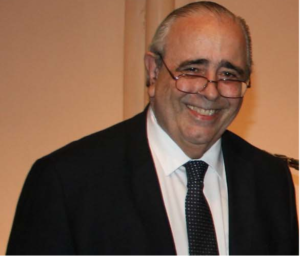 On behalf of the National Engineering Academy of  Uruguay, we welcome the foreign and national delegations..

It is a honor that CAETS has considered our Academy as the first country in South America to organize the annual Congress and to exercise the Presidency since the 2017 Madrid meeting, of such a relevant and traditional institution.

We also want to thank all the institutions and companies that have made possible the financing of this Congress, given that the National Academy of Engineering is an institution as old as por, and taking the risk of organizing a World Congress, was a very important challenge .

The subcontinent, like all countries inheriting the Spanish empire, when Napoleon invaded Spain, felt unprotected from the crown and with the example of the United States that had consecrated the Republic 40 years earlier, resulted in the conformation of the current republics that constitute the political map of the continent.

For sure, since then there have been variations over 200 years and changes as results of international and civil wars and processes of revolution and evolution.

Its political history has been conflicted by dictatorships and autocracies, but with a progressive evolution to a generalized democracy at the beginning of the 21st century.

The economic history of the continent has been that of supplying minerals and raw materials to the whole world, from the gold of the conquest to the food or minerals of the present and a generalized constant, the tendency to spend more than what can and thus feed a cycle of inflation and an increase in external debt, from which it has not been able to leave comfortably to face the future without the burden of the past.

Industrialization, although growing, has encountered the difficulties of competitiveness and productivity, but nevertheless, the services and tourism sector has developed in a very marked manner.

The distribution of income in the region is still very bad, but is improving.

Health has had a constant improvement reaching a life expectancy of 77 years, greater than other emerging areas and a child mortality of 7,9 per 1000 births.

Education has become universal, although we are in a process of transition of education needs and discussion of the most suitable means for the achievement of the objectives of education in the XXI century.

Infrastructure has lagged behind other emerging dynamic geographic areas, due to lack of investment and the territorial magnitude of the continent.

South America is a continent where development is concentrated in the periphery, close to the ports that communicate with the world and is one of the biggest challenges in the region, achieving the development of Mediterranean America, a project that the emerging Asian market has been supporting since the beginning of the 21st century.

I hope to have given a glimpse of this continent to those who come from other continents of which we know very little, for which we think that the situation would be symmetrical.

Tumorrow, Ec. Talvi, a man from the Academy who has embarked on a political life a month ago, will illustrate us more about the continent and its current situation and about the future.

Uruguay is a small country, but its location between Brazil and Argentina and at the Gateway to the waterwayl system of the La Plata basin, have given it special characteristics throughout history.

It was land disputed by Spain and Portugal first, then by Brazil and Argentina, with belligerent interventions from England and France and even was the scene of a navy battle in the 2nd World War.

Someone said Uruguay was a farm, a summer resort and a port. Currently the farm has a lot of planted forest but it is still a farm, breeding cattle and moving on agriculture and dairy products, the port has upgraded  to a logistic center including duty free zones, freeport regime, supplying services for the whole Mercosur region, a comercial agreement between Brazil, Argentina, Paraguay and Uruguay, and the summer resort of Punta del Este has the best beaches  of the Continent.

Uruguay is a very humanistic and spiritualist society, people is well educated and healthy, and its economy is not so bad, with a per capita GDP of  USD 22000  ranking in the  first  place in South America and  49  in  the World and its Gini index a measure of income distribution is  0,38 similar to some European countries and Japan.

We wish you, on behalf of the Academy, a pleasant stay, that networks of knowledge and friendship will be strengthened, that participation will be intense and that the satisfaction at the end of this event will be in accordance with expectations.

On behalf of the National Engineering Academy of Uruguay and the International Council of Academies of Engineering and Technical Sciences, we welcome all present, the speakers and the foreign delegations that accompany us in this CAETS 2018.

We thank all those who have participated in making this World Congress possible, under the title of “Engineering a Better World” “Sustainable Development of Agricultural and Forestry Systems”

To CAETS, for the trust placed in the National Engineering Academy of Uruguay to organize this World Congress throughout a process that began in 2014.

To the CAETS Secretariat in charge of the Acad. Ing. Ruth David who has accompanied and advised us effectively, as William Salmon previously did.

To the Engineering Academies of Germany, Australia, China, Spain, United States, France, Netherlands, India and United Kingdom, which have collaborated with the presentation of keynote speakers of relevance and / or made possible their participation.

To the institutions and companies that have collaborated with the financing in different ways and speakers of relevance.

We highlight in particular the contributions of Montes del Plata, the Inter-American Development Bank, the Uruguayan Institute of Technical Standards UNIT and the Chamber of Construction.

To those who have actively participated in the organization of the Congress in the technical aspects, in the identification of the speakers and the concretion of the sessions and to the Finance Committee.

CAETS has chosen the leit motif of «Engineering a better world» for the 21st century congress cycle.

A title that has a deep content and that crosses all fields of the life of humanity.

If the nineteenth and twentieth centuries were characterized by the prominence of Politics to achieve democracies in the world, and the advancement of the rights of citizens, since three centuries the conjunction of science, technology and engineering have been the main protagonists for the improvement of the quality of life of societies.

Technology without science is craftsmanship, science without engineering is philosophy.

In this conjunction of activities, in the twentieth century we have achieved that the basic needs of water, food, energy, communications progressively reach a growing number of citizens and collaborate in the achievement of the happiness of the people.

The effort for the universalization of access to material conditions are part of the millennium goals enshrined by the United Nations and in this sense, we believe that it will be more, what comes from the development of science, technology and engineering that what can reach society from political rhetoric or from economic models.

Engineering and its achievements are today part of the basic instruments of politics and economy of past and future centuries.

The media has been transformed. If in the late twentieth century what was not on television did not exist, what is not on social networks today, is what does not exist.

In the 21st century, engineering has achieved that the principle of talent and virtues as the only factor of inequality, recognized among men, is today a growing reality.

Suffice it to think that the big companies of today, neither have been generated by capital or by the sweat of work, but by the ability to combine technology, science and engineering.

The growth of income, has not been given by the basic factors traditionally considered of capital and labor, but by technological progress. For mid-twentieth century economists, expectation of a global market and billion jobs, would have been considered a utopia and technology was a factor that economics textbooks considered a concept of second magnitude in the process of economic growth.

CAETS for the first time in South America

This Congress is the first time to be hosted in South America, a land full of natural resources and in comparison with the rest of the world, with a small population.

It is the green continente, par excellence, because nature wanted it and because man and society have been balanced to reach their harmonious and sustainable development.

It is a continent that must necessarily look outside to find the market of eight billion inhabitants that require from minerals to food, from raw materials to finished products and to grow economically it must compete in the global market, and at the same time, in a democratic environment do it with equality.

Uruguay currently produces food for 28 million people around the world, meaning that for each citizen of Uruguay, 9 people eat in the world and by 2030 Uruguay aspire to produce food for 50 million inhabitants.

Its traditional pastoral economy was impacted by massive and sudden agricultural and forestry development, as a result of public and private investment policy processes and commodities market price conjunctures.

Per cápita GDP rank Uruguay as best ranked country in South America and 49 in the World, near the lower income countries of the developed world.

We started this process with the production of raw materials, with a high content of technological development and we restarted an industrial path with the forest industry that we did not imagine 20 years ago, and at the same time we became the largest software exporter of the region to the world, which has made the country a model of growth with equality in the region.

At the same time, the impact was very strong in infrastructure, in the demand for logistics, in the need for technological, agricultural and forestry updating, in decentralization to production centers and ports, in the formation of human capital and in the need for regulations that ensure that this development is sustainable.

A country that lives based on its renewable natural resources, must be very careful to bequeath to the generations to come a country that is at least equal to the one we received from past generations, the basis of the concept of sustainability.

Framed in the concept of “Engineering for a better world”, CAETS 2017, Madrid, focused on various areas of the bioeconomy.

Having designated Uruguay as the seat of CAETS 2018, we considered that the vision of this Congress should be guided by what is specific to the South America region and, in particular to Uruguay.

For this reason, we have focused on the sustainability of agricultural and forestry production.

In the coming days we will attend conferences by distinguished keynote speakers from the region and the world, on various areas of agronomics and forestry engineering and industrial processes and related services.

We will see how the intensification of production is compatible with the sustainability of the soil and water resource, how regulations are necessary for its sustainable use, the possibilities and requirements that are open to agricultural production and agro-industry and forest production and its industrialization, from the new uses of wood in construction or the challenges of pulp mills and even new industry products derived from the planted forest, such as, 3rd generation biofuels or biomaterials, we will see the importance of forests and agricultural products certification  and the demand and supply of transport infrastructure and logistics.

We wish you all an excellent Congress and a better stay in this country and in this continent, and our wish that the relationship between the Academies and the engineering and technical sciences professionals, result in synergies for the contribution to “Engineer a better world”. 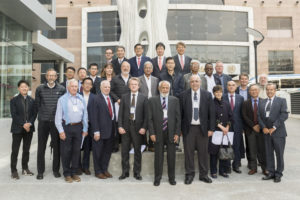 CAETS
INTERNATIONAL COUNCIL OF ACADEMIES OF ENGINEERING AND TECHNOLOGICAL SCIENCES